I had a major first world problem a few months ago. I mean I couldn’t eat, sleep, breathe, or do life… 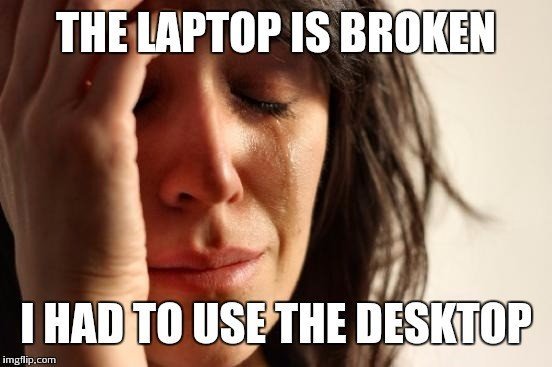 Yup, laptop was out of commission. You know when pop-up windows come at your screen Whac-a-mole style? It was a typical viral infection of the worst kind- the one that infects your technology. And even though I do own a desktop, I did what any normal 35 yr old independent woman would do: I ignored the issue for several months and used my husband’s laptop instead.

I mean, who the heck wants to pack up their laptop, drive the whole 30 minutes to the Apple Store, and sit there for what seems like hours to do something so UNfun?!?! But after a few months, I finally put my big girl pants on (aka my non-yoga pants) and decided to head to the store. Actually, I probably did have yoga pants on because I mean you have to be comfortable when you wait longer than 5 minutes for something that doesn’t result in food. So I packed up the ole sick laptop and in another self-demonstration of “females rule the world I don’t need a man I can do it myself”, I dragged my husband Abe with me for moral support.

When we rolled up in the Apple Store on a Saturday (not a Tuesday for you rap lovers), it was shall we say “overcrowded.”  This was the sequence of events: 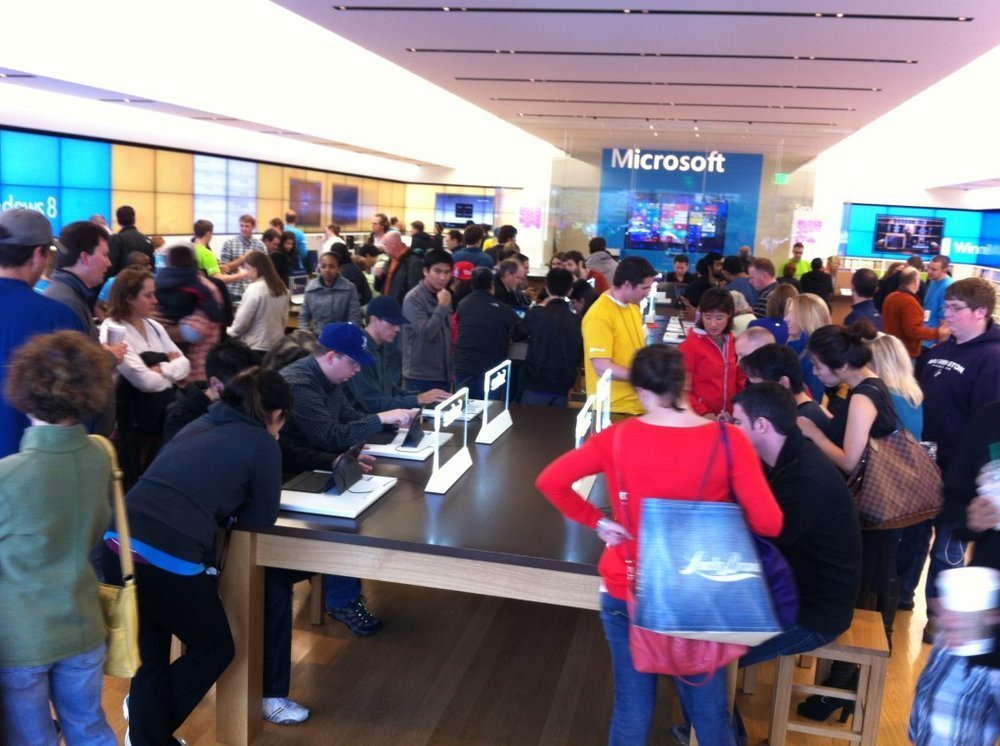 They must be giving something away. Here goes nothin… 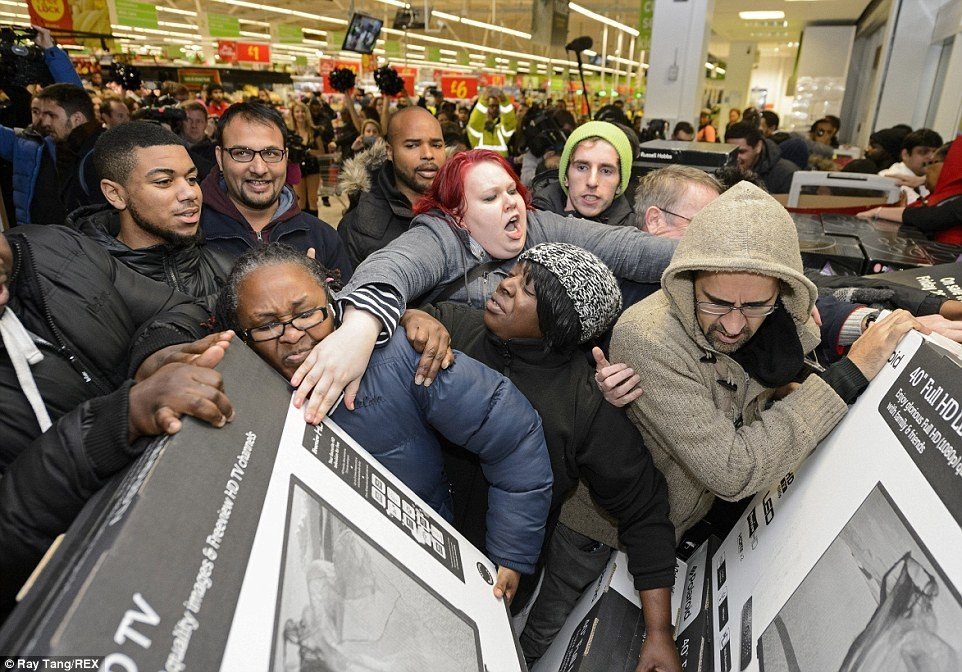 Hubby and I part the sea of consumers Moses meets Ninja Warrior style. We workout sooooo….. 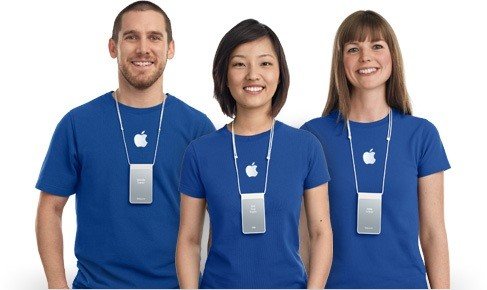 We meet blue man group. “Hey, hey guys, we’re smarter than you. How can we help you lowly computer-inept souls?”

So the blue shirt dude takes my name down and tells me it will be 1.5 hours. Come on blue man, I’ve got things to do like watch Narcos on Netflix!! *eye roll*

My husband and I grab empty stools, but for some reason sat at 2 different tables. Sometimes you need your space ya know? Unless of course you’re 75 plus, then it’s you + me = koalas on a tree!

After 10 minutes of mindlessly scrolling on our phones, this day does a zippydedooda 180! Mr. Gray comes into the store like an angel in grandpa jeans. First thought: A senior in an Apple Store?? My curiosity was peaked. It was like an animal out his habitat narrated by the Crocodile Hunter (bet ya just said that again to yourself in his Aussie voice). Second thought: WHY THE HEEECK did he just sit down next to my husband instead of me??!!?!?

But theeeeen, I thought this is kind of a dream of mine- a marrying of two loves- how poetic. My oooey gooey emotions took over as I gazed upon them: 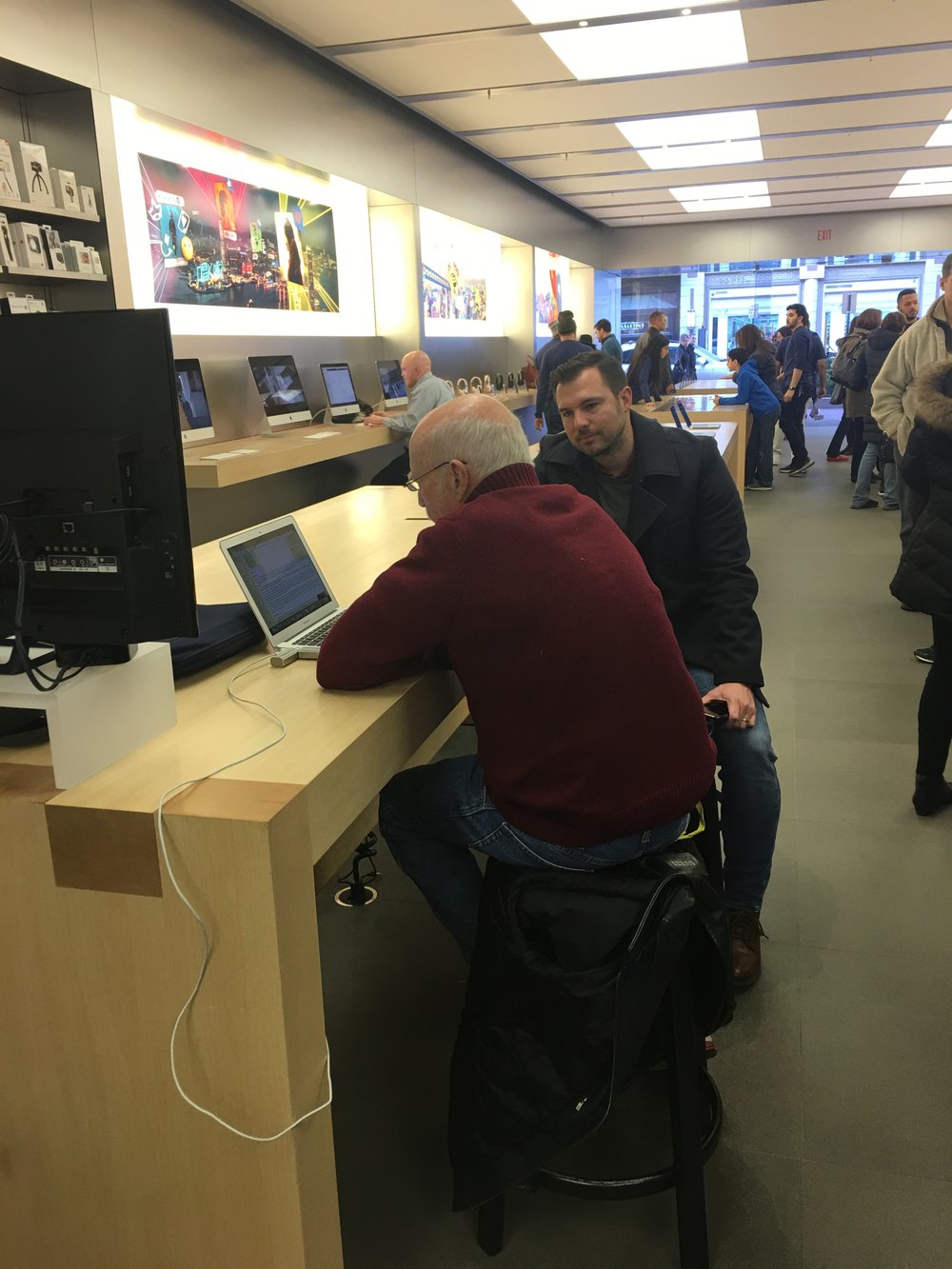 Have you ever seen something so beautiful in your life? I was basically the Bachelorette handing out the final rose…

When logic took over I quickly switched tables, honed in on Mr. Gray and his Macbook, and tried to get to the bottom of all this with an awkward conversation:

Gray: “Yeah, I do. Here’s my name, number, address, and let’s hang out every Sunday for bingo and oatmeal. There will be many more of me there!”

Okokokkkkkkkkk this is how the convo actually went:

Me: “Hi I’m Shelly. Are you here to get your computer fixed?”

Me: “Oh, wow I didn’t know they offered classes.”

Gray: “Yeah, I’ve taken them before. They are really good. This ones about……”

I could go on sharing my stalkerish banter, but lemme just summarize: Mr. Gray is a retired pilot (he even gave me his card for proof and it had a plane on it, so I mean, that’s official in my mind). Besides his impressive flying knowledge, he rocked on his laptop. I was watching him open windows and do all this fancy jazz with the icons- up, down, all around.

I didn’t know if I was feeling embarrassed about my lack of skills or that I underestimated what Mr. Gray could do. Now I was pressed AND impressed. Things were going swimmingly.

Then blue man busted back in my space and totally killed the vibe. I mean don’t you have to save the world or something??!? He asked my husband and I to move since that table was for the technology class. What is this “Mean Girls?” You can’t sit with us! UHHH, NOOOOO SIR NO. Don’t you understand I’m in my happy place right now? That my husband’s seat choice was fate designed by Zeus and Aphrodite and what other Greek-ish names I can’t remember from 9th grade mythology class? So I of course smiled and said “sure” hoping he would be sidetracked by some shiny iphone. He was. So back to my blind day-date with Mr. G….

We chatted more about his piloting career, etc. I even let Abe get a few words in (that’s a rarity for me but I was surprised he was engaging in the discussion). Clearly, I’m making great progress towards building my husband’s senior obsession…….kinda like I did with my cat, Prince. Abe always hated cats and for a few years would toss him off the couch…but nooooowww…it’s all excuse me cutesy paw games and fur kisses. Think I’m winning the war on both fronts. p.s. I hope he doesn’t read this. Sorry babe cat’s out of the bag about your new love for cats (pun intended ;o))

At long last, boy blue comes out from his supertech lair and gives me my just-like-new laptop. Although I knew this meant it was the end of today’s encounter with Mr. Gray, his class was gettin’ started and who am I to get in the way of this computer wiz? So, as I clung to his pilot card, Abe and I bid Mr. Gray adieu with the realization:

Age is just a number when it comes to computers, and if you ever need yours fixed, take a number and prepare to age. ;o)