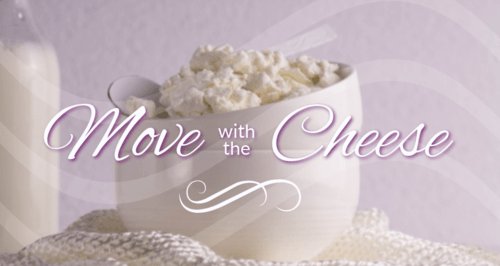 Move with the CHEESE

Yeah, I’ve never heard this either, but it’s a hot phrase on “Bachelor In Paradise” right now (one of my guilty pleasure tv shows):

Move with the Cheese Blooper

I don’t know about cottage cheese and gas (and I wouldn’t tell you if I did! Actually, I would. I have no filter lol) BUT, I do know that cottage cheese is popping up ever-y-where in my life right now. It’s like a sign from the cheese gods or something…and as always, Mr. Gray is involved.

I’ll explain. Since I’ve been essentially dairy-free for 10 years, the last time cottage cheese came into my mind or mouth must be years ago, but the past 2 days, I’ve oddly had numerous “encounters” with this old school, classic snack. Let’s put it this way, if the lottery were played in food types, I’d be playing cheese curds:

1. Last night, out of nowhere, I talked to my hubby about how I used to love cottage cheese, wished I could eat it again, and asked him if he likes it (he does NOT).

2. Today, I didn’t move WITH the cheese, but I moved TO the cheese. Yep. You guessed it. Cottage Cheese. But not for me —to help Mr. Gray locate it in the grocery store.

3. After I helped Mr. Gray #1 (who is really a Mrs. Gray) find the cottage cheese, a Mr. Gray #2 was in line behind me in the grocery store check-out, and you guessed it, he’s holding at leaning tower of Pisa, i.e. SIX containers of cottage cheese.

So I’ve started to think, what is going onnnnnnn?!?! I felt like there was a Gray Lesson somewhere in this…and of course, I realized there is!

Let me now elaborate on my encounter with Mr. Gray #1…

Mr. Gray was staring, for at least several minutes, at the dairy section like the way I would stare at, well a sea of Mr. Grays (SO MANYYYY- HOW DO I CHOOSE!?! I LOVE THEM ALLLLL). Actually, I wasn’t sure if this lady was mesmerized by the variety OR couldn’t find something, so naturally, I took this as an opportunity to be a hero:

She responded, “Yes, and I can’t find the cottage cheese.”

Shelly to the rescuuueeeee!!! Time to swoop in and help Mr. Gray. I’d like to thank the Academy, my friends, family, and mostly, myself for this Gray Award for being the best helper ever.

So I directed her away from the milks and yogurts over to the cheese section. I explained that there were a selection of cottage cheeses to choose from, including whole fat to skim. *Ahem* She stopped me. Without the *Ahem* but it felt like that.

Mr. Gray very kindly, but firmly noted that none of THOSE was the brand she likes and often buys.

Luckily I quickly saw the brand she was after underneath so I pointed it out and saved myself from a soul crushing experience. Then she goes: “Have you tried this? It’s the BEST!” She continues to tell me with such enthusiasm that this brand is like the original, old school cottage cheese. The hallmark of cottage cheese if you will. She said it was “the way it used to be, just like her grandmother used to make it.” I then asked her if she adds fruit and she responded “Oh no, I just add salt and pepper and it’s delicious.”

And that was it. She drifted away into the shadows of the grocery aisles……………………. (at least that’s how I perceived it when I tried to find her 2 minutes later for a picture!).

So I thought about, what could all this cottage cheese Hooplah be telling me? Why have the stars collided this way. And I thought why Mr. Gray was so dead set on that one brand. It’s because it made her FEEL something. It was the cottage cheese of her childhood, the olden days.

So what, right? Well, for seniors, nostalgia is so important. Being able to connect to the past through any avenue, whether it be music which I talked about it one of my past posts, or conversation, or food.

Warm and fuzzy moments of our childhood make us all feel good, but seniors have a special need for it since they are typically focused on the past, assessing it, and hopefully concluding that their life has been fruitful (pun unintended!). So don’t you think they’d want and need to focus on the good stuff in their former lives? I know I would. And if that warm and fuzzy feeling is evoked simply through little things such as finding the RIGHT Cottage Cheese, then by all means, help Mr. Gray when you see him or her to “Move with the Cheese. Move with the Cheese.”