Me, upstairs, yelling to husband, downstairs: “Can you put the cooler in the car?”

Me yelling again: “Hey! Can you put the cooler in the car?”

Me: OMG *FACE PALMING MYSELF*

……don’t know about yooooouuuu, but I absolutely can’t stand having to repeat myself- even if it’s my fault (it often is) that the other person can’t hear what I’m saying. I’m also known around these parts as being a mumbler. Like, “apparently” (as my family points out), I totally love to start sentences then turn and walk the other direction as I finish my sentence, so it’s impossible to make out what I’m saying. And the best part is I get frustrated when my family makes me repeat myself. Super fair, I know. Anywho, I do this so much so that my dad occasionally likes to mock me….like so:

Isn’t my dad precious? He’s more like Mr. White than a Mr. Gray (HAR HAR), and he sure loves to teaseeeeee and make fun of me. It’s deserved though. ;o)

And even when it’s NOT my fault that I have to repeat myself, I still am not the most patient person when someone can’t hear me— even— yes— even—- with—–bumbumbummmmmmmmmmmmmm MR. GRAY! Now, I think it’s fair to say, most folks don’t love repeating themselves. So, how do ya think Mr. Gray feels when he has to keep asking? 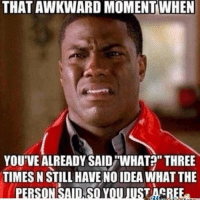 Well, besides feeling AWKWARD when having to fake agreement, this makes Mr. Gray feel like crap! I know this because my Grandpa, the Original Gangster Gray, would get frustrated and even hurt sometimes when my family couldn’t hear him. He was SO physically and mentally fit, but his years as a rifle coach in WWII led to pretty bad hearing. Whatryagonnado. Now- he was 96, so I mean, not bad for his age. But it was clear we would get frustrated with the situation and it was clear HE was frustrated that WE were frustrated. After the 3rd time repeating ourselves we’d be like just forget it. And looking back, I mean. That was not nice. It wasn’t his fault. And he genuinely just wanted to know what we had said. To feel normal, essentially.

Poor thing, he just wanted to know what was going on in the show! (King of Queens was his fav btw). And I was not the most patient in this department.

The truth is, yeah we have the right to get a little frustrated when we have to repeat ourselves, we’re all human, but if must be farrrrrr more frustrating to be the person WHO CAN’T ACTUALLY HEAR.  Not only does Mr. Gray not have a clue what’s being said during the family dinner conversation and why everyone’s laughing at the table, but he knows if he asks what’s going on, he likely feels like a bother to everyone. I know my Grandfather did.

So we need to remember it might suck on our end, but let’s all extend a little more patience here (or shall I say “hear”) HAR HAR. Me included, obviously.

But, there’s an upside to this can’t hear debacle!

— An upside to not hearing?

—- What did you say? (Jokingggggg)

Hearing loss CAN be used as an opportunity for laughter, to make light of a sticky situation, and to grow closer as a family (or as friends). Man, my family all laughed our youknowwhat’s off with my Grandpa’s interpretations of what my mom said. She would be like: “Did I ever hand you the cash?” and he’d go: “Did I stink up the trash?!” And when he realized what was really said, he’d laugh, and we’d all laugh with him.

So let’s make it our Gray Goal to repeat ourselves with patience and understanding, and when possible, turn those “Say Whats?!?” into “Snail Butts?!?”