Who Let the Dogs Out

Taylor Swift and I have 1, very important, thing in common:

Yes folks. It’s not our mutual love for pop music that makes TSwift and I soul sisters. It’s CATS!!!!!

Before you Team Dog-gers get all fussy, I love dogs too, but it’s just that I’ve had cats my whole life: Georgie/Gracie/Casie/Cleo and then there’s my post-college adoption slash best decision ever whom I’ve had for 14 years: PRINCE. Meet my main fur-man:

He’s my BAAAAABBBBY. And even though he’s finicky and stubborn like his mama, he eventually listened to me lol. If you’re wondering about his awesome name, I’m sorry to disappoint — he was not named after the late great artist, he was named after royalty (in general) because I was single and ya know, needed a Prince Charming.

My love for Prince and cats in general is so deep, that I think it eventually spread like a beautiful disease straight to my cat-hating husband. For example, when we were dating, he used to shove him off the couch when he wanted to sit down; today, he talks to him and pets him so much with such gentle-loving care that I’m like DUDE. FORGET ABOUT THE CAT. Remember me, Shelly, the cool chic you married?

Despite his growing affection for Princey, there are still things that would put his panties in a twist, such as this completely 120% necessary house decor item: 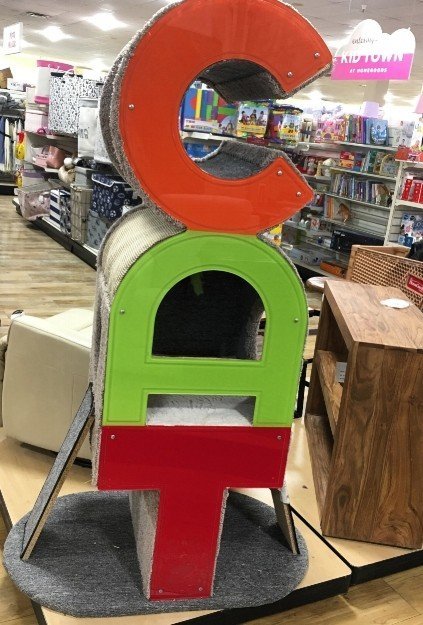 So, why do I love cats so much?! Probably for the same reasons you all do (or at least, dogs if that’s more your pet style). It’s because they have always shown me love in return with their snuggles and purrs and rubs up against my leg. Prince is an “always there for me” companion. For the last 14 years, every day, happy, sad, crying, angry, no matter my mood he has always been there, showing me love. Not all cats may be as cuddly and physically clingy as he is – it’s like Stage 5 Clinger situation- can a sista take a bath alone–but, they all show their affection in their own way. And dogs, well, we all know dogs are the happiest animals on the planet and when you walk in the house it’s like:  “HIHIHIHIIIIIIISOHAPPYTOSEEYOUOMGOMGOMGOMGGGGGFEEDMELOVEMEPETMEPLAYWITHME*

I believe our affection for our pets is even greater due to their loyalty. Seriously, it’s like “The Godfather” level loyalty: “Never go against the family.” So yeah, we all know dogs will lay down their life for their owners, but have ya’ll see this cat video? Cats get a bad rap as being too self-involved and like: “Here Cupcake, come sit on my lap!” “No, not right meow, I’m licking my paws.” So, I just had to share this on behalf of Team Cat:

I mean, slap a cape on this cat and a give him a lifetime supply of catnip, cardboard boxes, and ribbons!! Literally, this video was like me going after a 300lb Mr. T with my little lady fists. Gutsy Garfield.

We love our cats and dogs because they increase our quality of life by bringing joy and companionship. They are icing on the cake of life. But to Mr. Gray….pets are often much more…rather than a bonus, they are the connection to life.

It is true that in recent years, pets are becoming an “add-on” at senior living facilities such as nursing homes because of the joy they bring to seniors. The companionship, even temporary, of an animal makes seniors smile and prompts all sorts of amazing health results like decreasing heart rate, etc. This is a positive change in the senior care world. In other cases where Mr. Gray lives alone, however, he literally depends on his pet companion as a piece of survival. Seniors who can function and live on their own sometimes often have no family or friends left for companionship. In these cases, a pet can be a lifeline saving Mr. Gray from isolation and despair; a co-dependency is often created that really can be beautiful. Like spunky Garfield basically saved that little boy’s life, pets save Mr. Gray’s life in less obvious acts of heroism every single day. How? By doing things like this on a daily basis:

HOLD. THE PHOOOOOOONE. My husband won’t even walk that slowly next to me when my feet hurt from wearing heels. He’s like: “I can’t walk that sloooooow.” Well honey, as this weiner dog just showed you, YES. YOU. CAN.

This dog – what can I say- his 2 inch baby steps shows he is truly a senior man’s best friend. He is a true partner to Mr. Gray, meeting him right where he is at in life, no faster, no slower- every single step of the way. You better believe Mr. Gray feels that partnership and knows he is not alone, and in a way, he is being understood.

This is so special because Mr. Gray is often misunderstood: society overlooking strengths of old age, but zooming in on the weaknesses. Well, pets don’t judge –they just love. Let’s let our dogs out and be more “animalistic” towards our seniors! That would be PURRRFECT.